Gallery WM is delighted to present:

by the families of:

Anecdotal rediscoveries from our family photo-albums.

From April 17th through August 21nd  Gallery WM will showcase anecdotal excerpts from the photo-albums of three people; Wanda Michalak, Paul Schaublin and Frederieke Jochems. Ranging from 1900 to 2000, from black-and-whites to colour, from clichés to the exceptional, originals to reprints. These are rediscovered windows into the lives of three different families; lives led, loves lived and lost lineages. An intimate look at family dynamics from Cape Town to Gibraltar and from Poland to The Netherlands. 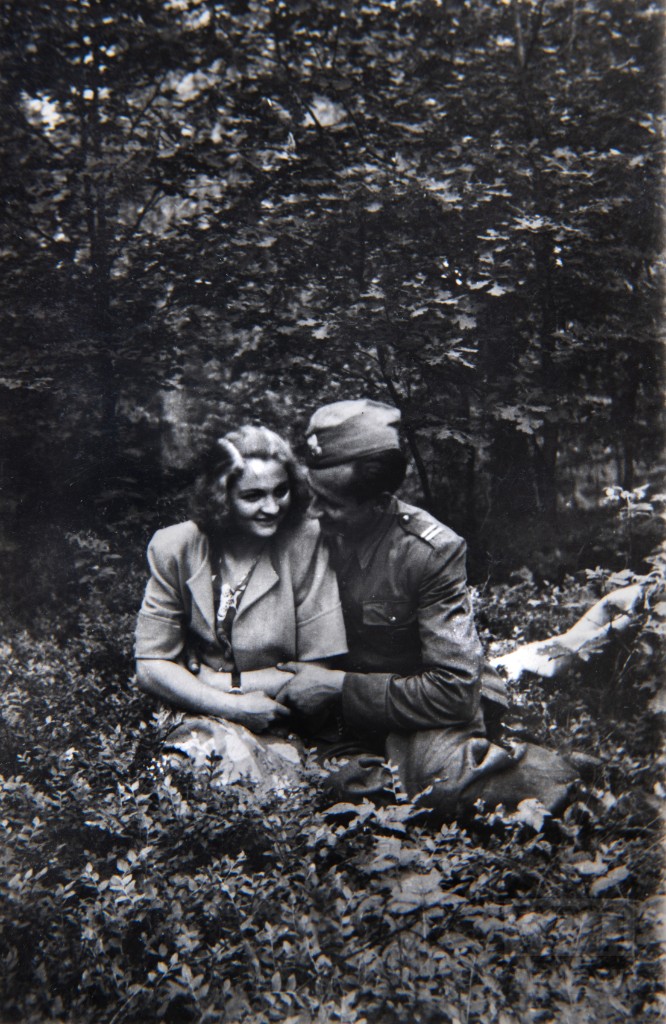 “Traces” showcases rediscovered, anecdotal excerpts from three families’ photo albums; those of Wanda Michalak (Polish), Frederieke Jochems (Dutch) and Paul Schäublin (British-Swiss). All three have written personal texts about their rediscoveries below. Suffice to say, these unearthed selections came about during clean-ups and re-organisations of attics, basements and archives after the passing of loved ones, and during the Covid-mandated isolations that have impacted all of us. What we have selected ranges from the exceptional to the mundane, from black & white to colour, from 1900s to the 2000s. Jochems’ selection focuses on her two aunts; aunt Tabitha and her daughter aunt Bets. In it, we see an amateur conceptualism; mother and daughter taking pictures of each other in the same place, with the same background, spanning three decades. Schäublin has chosen a limited selection of photographs from the 1910’s and ’20’s, immortalising the migration of his grandmother Cleopatra, from Cape Town to Gibraltar and Spain. Proof that labour migration has been around forever and always will be. Michalak’s selection, forming the majority of the exhibition, focuses on her mother – my beautiful grandmother – and the extended family and friends that populated her life before the Second World War, during, and after.

I don’t think it is merely a coincidence that family albums have been uncovered, rediscovered, pored over and re-organised. When life outside – our former social lives – has all but come to a halt, from one moment to the other, it does not seem so strange that our gaze and focus should turn inwards, as just one glance outwards simply reconfirms the literal lockdown of external life as we used to live it. So why do we gaze at those old family photos? What subliminal messages are our forefathers sending us, do you think? Maybe it’s just that looking at lives lived is a way for us to feel alive ourselves. Maybe it has to do with an affirmation, that “yes, lives before me were led, there was drama, there was trauma, but there was also happiness, trips to the capital, birthday parties, holy communions, family portraits … and I am living life, much in the same way …”? Perhaps it is a reaffirmation of one’s own existence, as evidenced by the existence of lives having been led by our families?

Something happens to us when we gaze at our forefathers from former lives and loves. We know, cognitively at least, that these people were/are a prerequisite for our own existence. We look at lives a lifetime ago, and know, that if any small and tiny thing had played out differently, we might not have been born. If any one of our extended family had died in childbirth, had not survived the war, had lived life differently, had fallen in love with someone else, our existence would be in serious question ; our lives an extremely tenuous thing.

Perhaps. Personally, I am fascinated and emotionally invested with these traces of our families’ existence. I see my grandmother, a hundredfold, younger than I am now, living life with abandon, dancing on the edge of a metaphorical volcano. Having fun, flirting, posing, glancing coquettishly into the camera lens. She was born, she was young, she had fun, and lived through hell. She had children, grew into middle age, became a grandmother, and finally passed away. I am, because she was. And what beautiful traces she left. 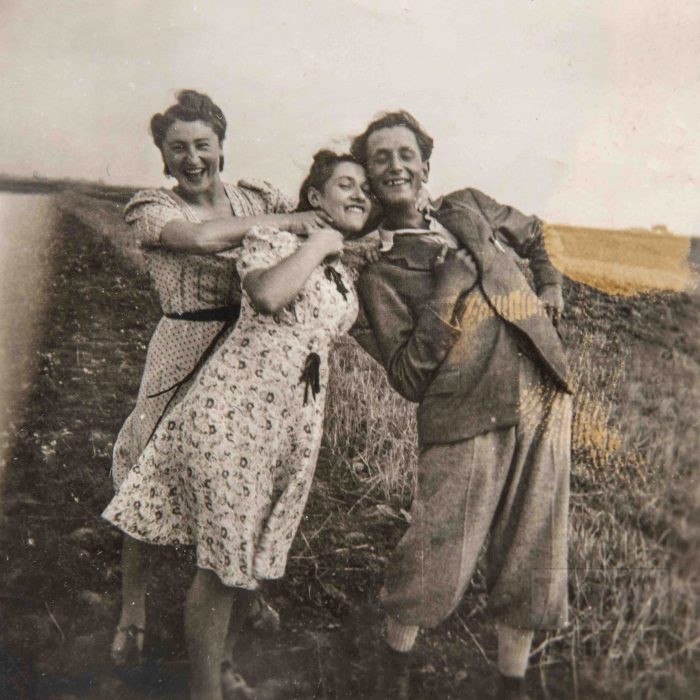 We, the guardians of our Traces – Wanda Michalak

When my grandmother frantically packed her things to flee the approaching Germans in 1939, she took with her a couple of duvet blankets, … and her photo albums. Or so the family story goes.

They were forced to flee a few times more before they were allowed to go home, to the provincial town of Ciechanów, near the border of Eastern Prussia. Each time, the family albums went with them. Accused of being involved in anti-German activity, my mother went into hiding on farms and in villages that surrounded her hometown. She was betrayed however, and my mother ended up in a forced-labour camp, a subcamp of the Stutthoff concentration camp system.

The first guardian of the photo albums was my grandmother. Later on, it became my mother. As a sickly child I was often in bed with one thing or another, and in order to pacify me, my mother would give me the albums to look at. This was probably not a great idea as I would proceed to colour them in with my crayons!

This show is all about my mum.. but also my grandmother. And my father. And all the unknown people who are exhibited here. I don’t know who they are, but they were part of my mother’s life. I can’t ask my mother who they were any more.

I am the guardian of the albums now. And my son. And then his son. Hopefully. 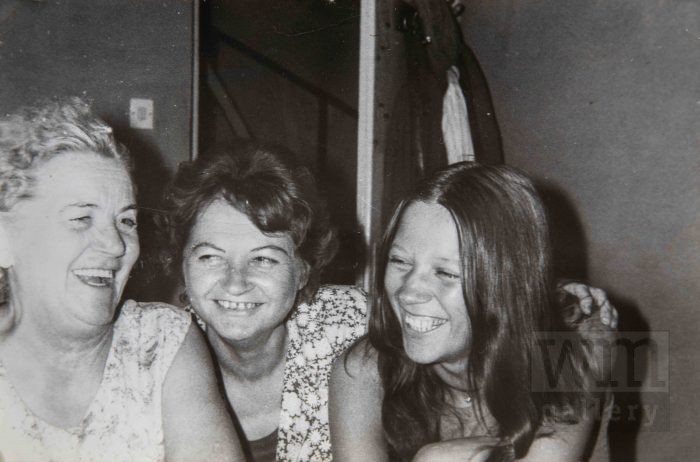 In the  legacy of my mother I found my aunts photo albums. Since childhood I knew this aunt Tabitha (wife of my grandfather’s brother) and her daughter Bets. Husband/father Johannes died in 1945, mother and daughter lived together since then as far as I can remember. For my birthday I always received a card from them with 5 guilders folded in it. When travelling by bike I sometimes visited them in Ermelo. Aunt Tabitha died in 1988, her daughter Bets soon after.

One of their photo albums struck me more than the others. It recalls their holiday trips during the 60’s, 70’s and 80’s, when they travelled to Luxembourg, Valkenburg  or Maastricht. Besides visiting castles and cities they posed in a flower garden, on a heath, in front of an autumn forest or in and around their home. They always took a picture of one another on the same spot with exactly the same background. For this exhibition I want to draw attention to these photos in particular because I consider them interesting in a photographic sense: the consistency and planned attitude ( familiar to myself ) by which they executed their photographic actions. In spite of – or maybe thanks to – their amateurism the pictures are sometimes beautiful and aesthetic. If you look carefully you will see that the series tells their story, revealing subconsciously their mother/daughter relationship. In current times, in which people continuously take pictures of themselves, compulsively smiling, I regard their honest unadorned grumpiness as a relief. 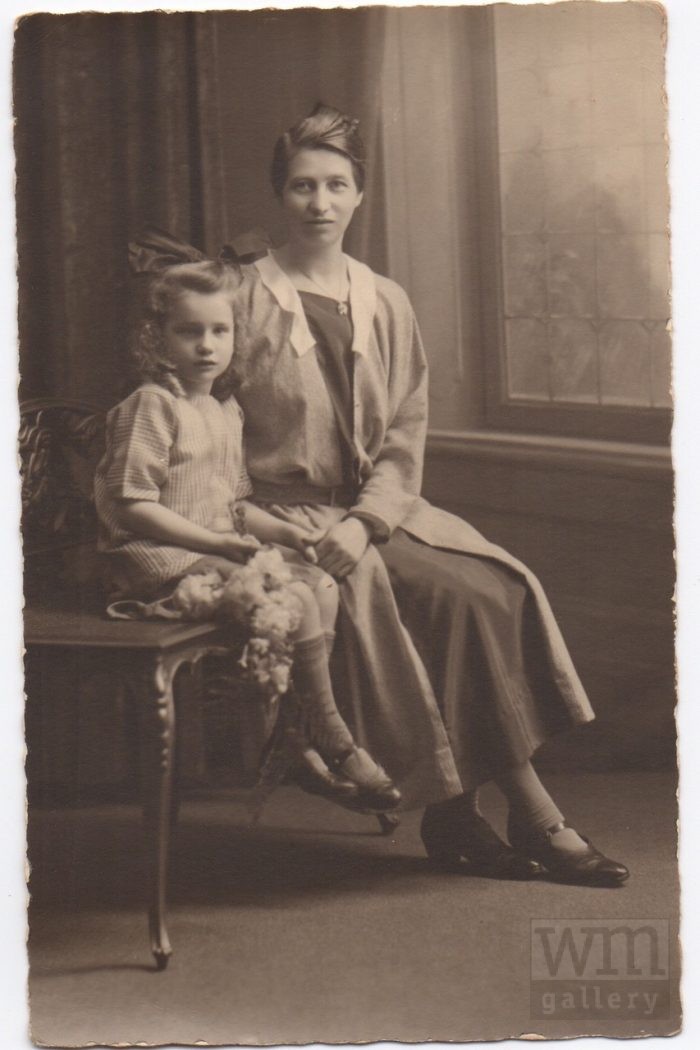 Hundred years ago, in 1921, the Oakley family – my maternal grandparents and their 3 children – relocated from Cape Town (South Africa) to Gibraltar. My grandfather Eddy Oakley was working at the time for the Eastern Telegraph Company (a British telegraph communication company) and after some 10 years spent in South Africa he got a new assignment in Gibraltar. The family comprised Eddy (42), his wife Cleopatra (34 – my grandmother) and their 3 children Phyllis (10 – my future mother), Frank (8) and Vera (4). The Oakley’s travelled by ship from Cape Town to Gibraltar via Southampton (England).

The vessel for the Cape Town – Southampton leg was the “Edinburgh Castle” from the Union Castle Line. It arrived in Southampton 6 June 1921 after a two weeks cruise. The travel must have been a pleasant time. I recall my mother mentioning there was a big party on board when they crossed the equator, this was the so-called “Crossing the line ceremony”. The ship on the Southampton – Gibraltar two days leg was the “Narkunda” from the P&O line.

Thanks to the assistance of my friend Pete Purnell and by consulting the National Archives of the UK, we discovered detailed documentation (mainly passenger list information) regarding the travel my family made. I was totally flabbergasted when I saw these hundred year old handwritten lists. It was for me a huge jump in the past, unearthing traces from forgotten times, almost like exploring the Titanic. It was also an opportunity to revisit the few remaining family photos of that time I still possess and contemplate them from a new perspective.

The Oakley family lived in and around Gibraltar until the outbreak of the Spanish Civil war in 1936. Grandfather Eddy sadly passed away in December 1933. My parents met in Gibraltar and got married there in January 1935. My father Emilio was a Swiss migrant who left his country in 1928, seeking for a better life in South Europe, first in Spain and later in the British colony. 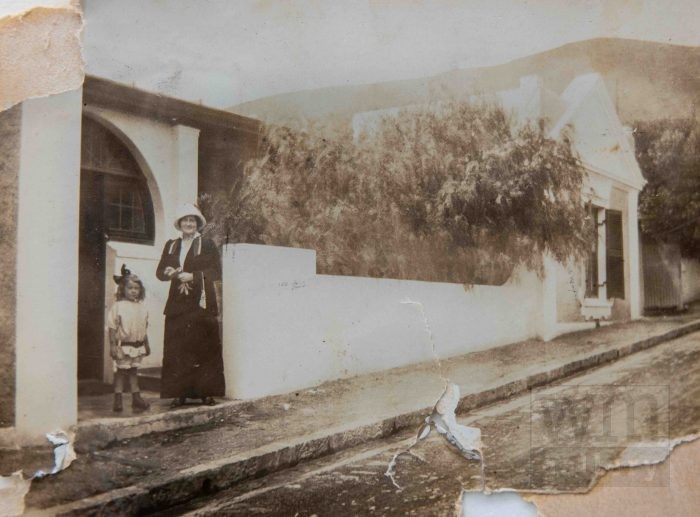 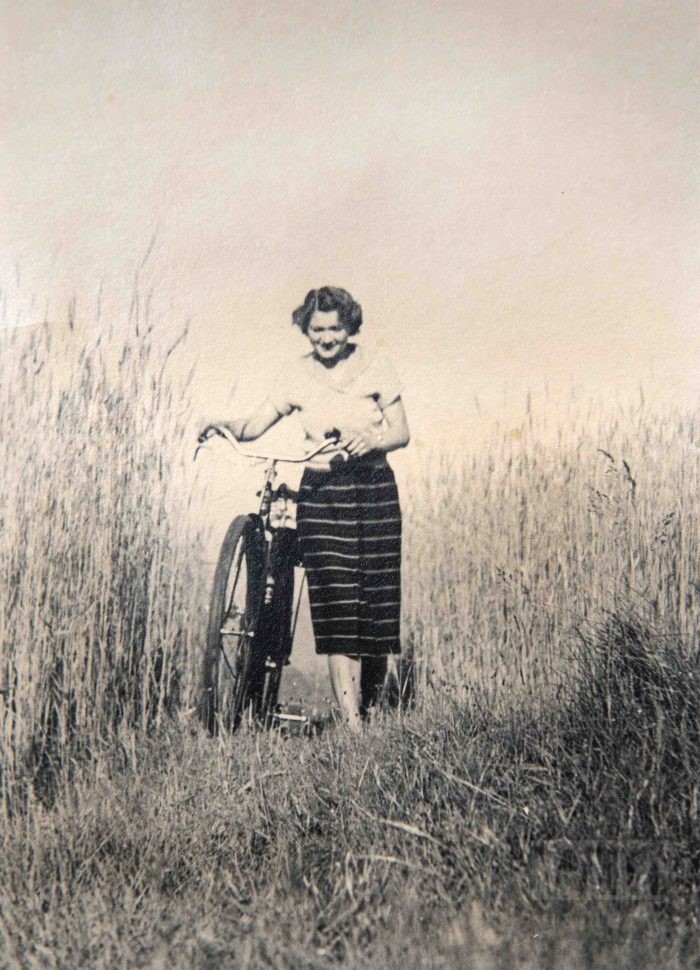 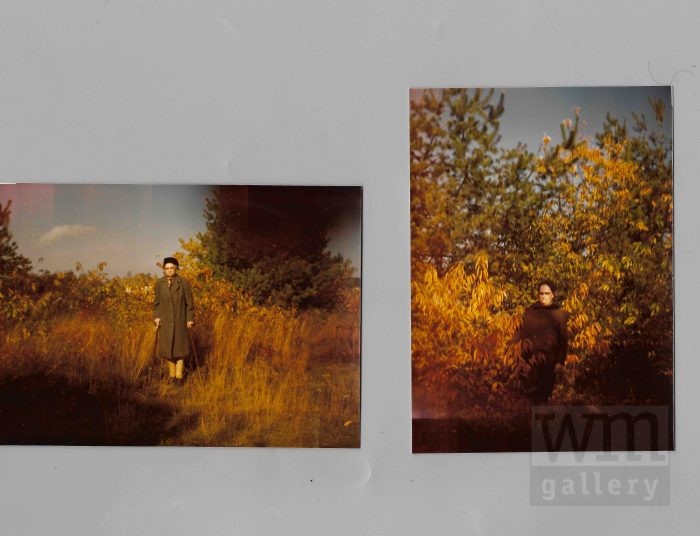 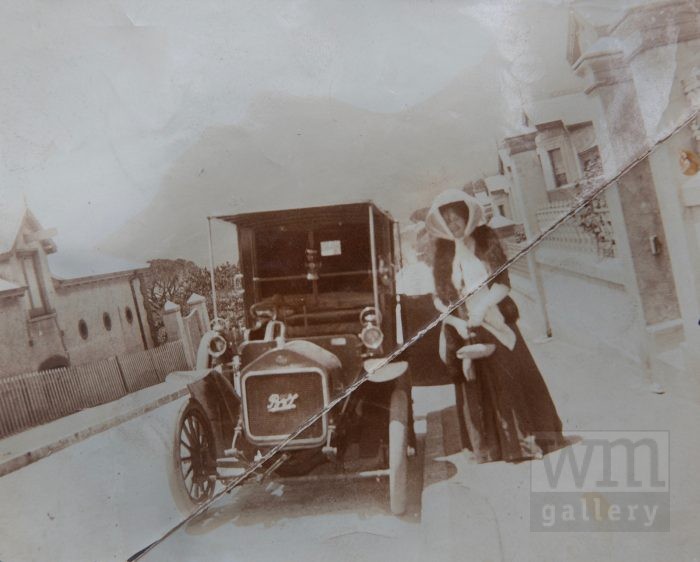 Cape Town ca 1911 “She doesn’t look so “miserable” as her letters seem to convey eh? This is how mrs Oakley comes home from town! The parcels contain little things for the “newcomer””(note on the back of the photo)